The land in which Victoria Park resides was originally used as a limestone quarry, which was owned by the North-Eastern Railway Company. However in 1886 the land was bought by West Hartlepool Rugby Football Club for the development of a new rugby ground. The ground was then named the Victoria Ground in celebration of Queen Victoria’s Jubilee Year.

However in 1908 West Hartlepool Rugby Club went bust leaving “The Victoria Ground” vacant. Shortly afterwards, the ground was registered under the name of “The Hartlepools United Football Athletic Company Limited”, a football team representing both the town of West Hartlepool and the original settlement of Old Hartlepool.

In 1916 during the first world war the ground was bombed by a German Zeppelin, which destroyed the main stand. A temporally stand was built and after the war Hartlepool tried to claim compensation from the German government in order to replace it. However these attempts failed and the replacement stand was eventually replaced by the Millhouse Stand in the 1980s. In 1998 West Hartlepool Ruby Club were allowed to once again share the ground until 2001. However this only lasted until 1999. In 1996 the ground underwent improvements and was renamed to Victoria Park. 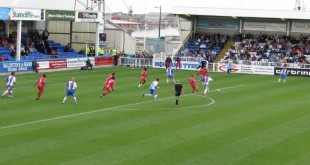