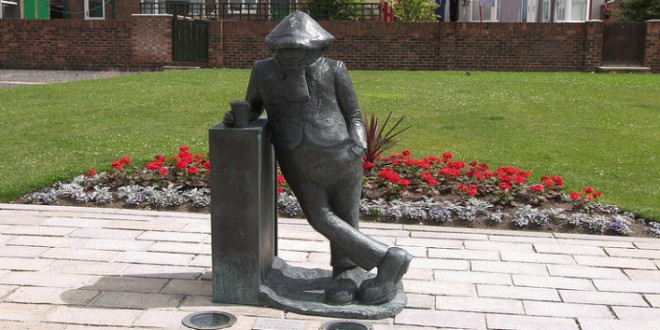 Reg Smythe the cartoonist, lived in Hartlepool and the Andy Capp cartoon is set there, sometimes local landmarks are featured in the cartoons.

That most slothful of characters, Andy Capp did a rare thing in the 1980s: he stretched his legs and got about a bit. The subject of a newspaper cartoon strip since 1957, when he first appeared in the northern edition of the Daily Mirror, Andy became the star of a British stage musical in 1982, written by Trevor Peacock and with music by Alan Price. Then, in 1988, he attracted his own ITV series, written by the redoubtable Keith Waterhouse.

Capp was created and drawn by Reg Smythe, a talented artist with no formal qualifications but a fine eye for character. Smythe has always seen Capp as someone from the north-east of England (he himself hails from Hartlepool), although the Capp traits are certainly not confined to gentlemen of that area. In short, Andy Capp is the classic anti-hero, an idler never seen without his trademark cloth cap and fag-end hanging from his bottom lip, whose home life consists of endless cups of tea, TV and kipping on the sofa, and whose outdoor life comprises drinking endless ale at the pub, visits to the betting shop, dodging the debt collector and the odd game of football. Capp is also a terrible chauvinist, his wife Flo being perpetually frustrated by her negligent hubbie, although she does occasionally get the last laugh. Flo’s trademarks are her slippers, rolling pin (used mostly as a weapon) and rollered-hair.

With the newspaper strip syndicated to more than 50 countries and translated into 14 languages (Andy Capp is known as Kasket Karl in Denmark, Willi Wakker in Germany, Angelo Capello in Italy and, best of all, Andre Chapeau in France), here was a situation ideal for TV exploitation. Surprisingly, it took 29 years (1957 to 1988) for the idea to be realised. Even more surprisingly, the series, when it did finally occur, was a pronounced flop. The ingredients for a success were there: the Waterhouse scripts and the ideal actor in the lead role – James Bolam’s Terry in The Likely Lads and its Whatever Happened To sequel had often been likened to Andy Capp – but the episodes, shot entirely on film, without a studio audience, were unreal and much less funny than the scripts suggested, representing the first real disappointment in Bolam’s glittering career as a comic actor.

He was involved in an episode of the third season of Family Guy entitled And the Wiener Is…, when he is seen at the Drunken Clam with Peter before getting into a fight with Flo when she catches him drinking.

Brian Johnson of AC/DC also bases his look off the character.

In The Simpsons episode Marge vs. the Monorail, Homer is seen reading Andy Capp in the newspaper. He roughly summarizes the comic when he laughs and says, “Oh, Andy Capp, you wife-beating drunk!” Homer also lay down on the couch in Andy’s characteristic style in Make Room for Lisa, stating “That Andy Capp was on to something.”

Jean Smythe, wife of Hartlepool artist Reg Smythe, unmasked the 5ft high bronze sculpture in the town’s Headland area in June 2007. The statue, by Shropshire artist Jane Robbins, captures the working class hero in a typically relaxed pose, but minus his trademark cigarette. The £20,000 monument now has pride of place outside the Harbour of Refuge pub, in Croft Terrace.