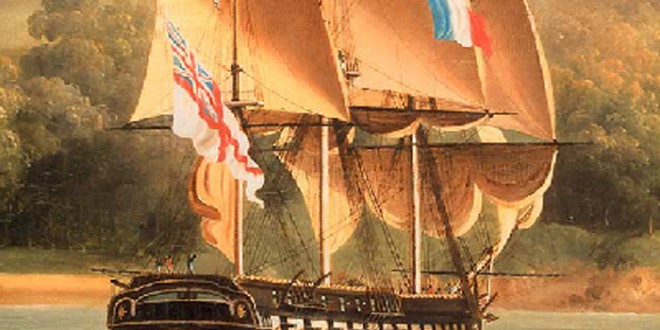 History of the HMS Trincomalee

In 1812 a set of plans for two new Leda Class Frigates were drawn up in England.

Frigates were light, fast and agile warships that generally concentrated their firepower on one deck. In terms of both firepower and armour they were no match for a ship of the line, but were more than able to outturn and outrun one. Frigates were essentially predators, stretching out from the grand fleets of the day to seek and destroy hostile merchantmen, pirates, slavers, and other naval vessels of similar size – in most of these cases, the sight of a frigate bearing down on their vessel instilled a sense of real terror in the crew on board, and if they unwisely chose to not surrender, defeat was highly likely.

Frigates were the eyes of the fleet, expanding far into the oceans to carry dispatches and orders to and from the sluggish squadrons, and locating and harassing enemy vessels until the bulk of the fleet could catch up and engage in battle proper. With British colonies all over the world, it was a safe bet a frigate would be somewhere near to offer comforting protection. There can be little wonder as to why many midshipmen aimed to command these vessels, with such a dashing and adventurous role in the public eye.

Between 1800 and 1830 47 frigates were built from the pattern set by Hebe (A French frigate the British captured in 1782), known as the Leda-class from the first vessel of the type as was traditional. The name was taken from Greek mythology, as was common at the time, from that of a woman seduced by Zeus while he was masquerading as a swan. Many artists of the time depicted this somewhat risque and popular scene, and so the name no doubt seemed appropriate for the dash and allure of these fast and sleek hunters of the sea.

As the oak forests of England were straining under the demands of the war against Napoleon and centuries of shipbuilding might (an average man of war like HMS Victory could consume over 2000 mature trees), some examples were ordered to be built in India, in the British colony of Bombay, which had easy access to the vast forests of Malabar Teak to be found inland. Trincomalee was one such example, the twelfth Leda-class ship to be launched. As originally intended, the Leda-class would carry 28 18-pounder guns, ten 9-pounders, and 8 carronades (mortar-like cannons with a shorter range but higher accuracy) – however, as Trincomalee would exemplify, this was not always the way they would turn out!

The first ship was to be named Trincomalee, after an action in 1782 between the Royal and French navies off the Ceylon port of that name, and the second was called Amphitrite. Due to oak shortages, both the vessels were to be built in Bombay from teak. During the voyage the vessel carrying the plans, HMS Java, was attacked and defeated by USS Constitution. Taken as a prize, Java sank under tow, taking the plans with her. Further plans were subsequently dispatched by the Admiralty, but only after several months delay.

In May 1816 work finally began on HMS Trincomalee at the Wadia Shipyards at Bombay, near the teak forests of Malabar. Master shipbuilder Jamsetjee Bomanjee Wadia supervised construction, one of 14 ships he would build for the Royal navy during his life. In accordance with Zoroastrian tradition, an engraved silver nail was hammered into the keel to ensure the vessel’s well-being.

Construction was completed on the 12 October 1817 and the Trincomalee was launched amid great celebrations. The cost of her construction was £23,000.

In the period of 1817 to 1819 temporary masts, yards and rigging were fitted, as well as four 12 pounder carronades, for the journey to England. Escorted by HMS Fowey, the ships stopped at her namesake port of Trincomalee to embark guns, ammunition and stores for the long voyage ahead, including personnel for repatriation to the UK from the British Squadron based there.

On the 30 April 1819 Trincomalee arrived in Portsmouth, where the temporary fittings and armaments were removed for permanent fitting out. The journey has cost a further £6,600.