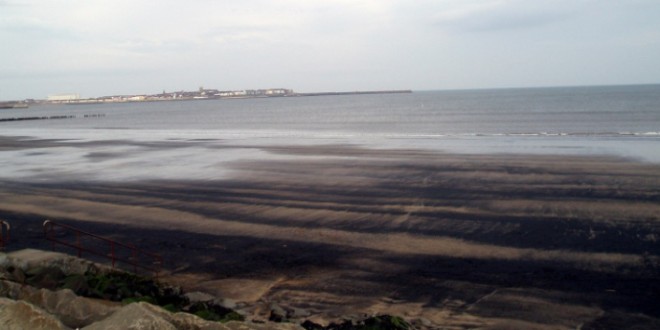 Hartlepool Submerged Forest is a site of Special Scientific Interest (SSSI), which lies on the foreshore at Hartlepool, on the north-east coast of England. This stretches to the north and south of Newburn Bridge for approximately 400 metres.

Hartlepool Bay seems an unlikely place for forest today however thousands of years ago this whole area was covered with trees and peat bog. In Mesolithic times, roughly 8000 BC, there was still a land bridge between Britain and the rest of Europe and we know that much of what is now the North Sea was low lying fenland.

The rising sea level inundated these fens and in places the remains of these ancient forests can still be seen. The peat beds exposed at low tide in Hartlepool Bay are among the largest areas of this ancient landscape still to be seen.

There have been three major programmes of investigation of the forest in recent years; in 1990, 1995 and 2002 as part of sea defence works. These investigations have produced finds such as worked flints and lines of wooden stakes.

In 1984 over two metres of wattle hurdling was uncovered on the beach due to erosion of the peat which was recovered and conserved by Durham University. A radiocarbon date of approximately 3600 BC was obtained.