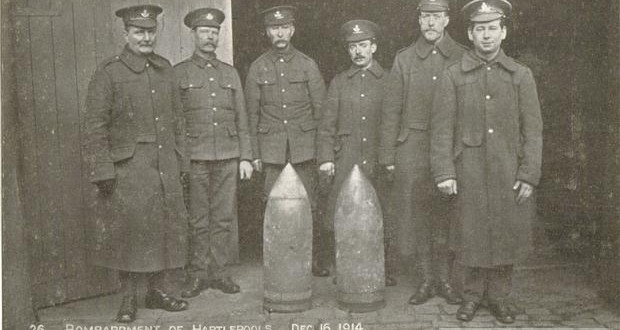 Over 100 people died as more than 1,000 shells rained down on the town for about 40 minutes from the three heavy cruisers Blucher, Seydlitz and Moltke which emerged from the mist shortly after 8am on December 16 1914. Amongst the casualties was Theo Jones, the first soldier to die on British soil in the Great War.

The previous evening four battle cruisers, ‘Seydlitz’, ‘Moltke’, ‘Von der Tann’ and ‘Derrflinger’; one heavy cruiser, ‘Blucher’, four light cruisers and two flottillas of destroyers had left their base, heading out into the North Sea. The intention was to bombard Hartlepool and Scarborough, both were by now fortified towns and considered legitimate targets.

At dawn, six miles east of Hartlepool, shots were exchanged between them and the destroyers of the Local Defence Patrol who left to raise the alarm. No-one in the town heard anything. The ‘Seydiltz’, ‘Moltke’ and ‘Blucher’ continued to steam towards the nearest target and the rest headed for Scarborourgh.

At 8.10 a.m. as the inhabitants were readying themselves for the day’s work, the first shell was fired. They were aiming at the shore batteries and the Lighthouse. The shell cut all the lines of communications between the batteries throwing them into confusion.

By 8.25 a.m. most of the ships had come as close as four thousand yards and had begun to pour their fire into the gun emplacements and the docks. Some of the armour piercing shells had delayed action fuses and a number bounced off the batteries into the town.

Henry Smith Terrace was dangerously close to the action. There were hundreds of people milling about, taken totally by surprise, the coastguards were doing their best to evacuate everybody safely. The air was filled with black smoke, the screams of shells passing overhead and the cries of children separated from their families. For about three quarters of an hour the bombardment continued, 1,150 shells were fired into the area killing 112 and wounding over 200.

When it was clear the attack was over people began to filter back to the shoreline, some helping to dig out the injured from collapsed buildings, others helping themselves to shell fragments to keep as souvenirs.

Amongst the casualties was Theo Jones, the first soldier to die on British soil in the Great War.