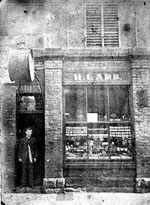 THE mechanics of the clock, the name on the doorway and the reputation of the family run business, all remain the same as they did when Henry Lamb opened his jewellery shop 135 years ago. However, along with a change of location, there is one other notable alteration.

Gone are the days when H Lamb Jeweller was managed and run by one of the Lamb family. Nowadays, like it has for the last ‘twentysomething’ years, there is an adopted Hartlepudlian running the show.

When John Davey, who previously worked in a jeweller’s in Croydon, popped into his local dental practice, he could not have imagined how much of an impact a dose of toothache would have on his life.

Not content with having his pain erased, he was also determined to take the dental nurse out on a date. Little did he know that the beautiful Eileen would soon have him uprooting north to her hometown of Darlington.

That was in 1969 – the same year Lamb’s moved from Lynn Street to York Road – and John had started to walk the path he was destined to take. Today, some 39 years later, he is the only non-Lamb to have owned one of the longest running local business ventures in the town.

“It could have been different, but that’s how it has worked out,” said John, 58, sitting proudly at his desk in Lamb’s on York Road . “After Darlington we got a council house in Peterlee and I saw a job here advertised.”

After meeting up with Harry Lamb, a former captain in the army who took over when his father Matthew died during World War II, he was soon granted his first job in Hartlepool.  “It was £25-a-week for five days,” said John. “I remember, I said ‘I couldn’t make the move for anything less than £30’ and the job was mine.” That was in 1972 and after more than a decade’s service, he offered the chance to take control.

“After Harry had a heart attack he wanted to retire and for me to take it on,” he said. “Having grown to know and respect the years of work the Lamb had put into this, I felt like I had been entrusted in making sure it continued to run in its own special way.

“I wanted to continue the tradition, continue the name, keep the clock outside the door, and continue to work and pleas the customers. There is a loyal base of customer with us and we believe we are important to them. That was the same when I arrived and I would like to think il the same now.”
John is eyeing up semi-retirement in seven years time, when he will be given the responsibility of finding someone to help to carry on the good name that H Lamb Jeweller has built for more than a century.

Firstly, though, he only has thoughts on aiming to please and maintaining the strong spirit which exists among his sma workforce. Eileen, his wife, was part of the team herself but a brain tumour five years ago means she now only helps out occasionally, while the rest work to preserve and improve an already glowing reputation.

The five-strong team are all Jehovah’s Witnesses, with Liz Henderson and Micah Alford there daily, Natalie Webb works part-time and book-keeper Jim Cleary comes in once a week. “We take our religion seriously, but not ourselves,” said Jim, summing up the warm atmosphere around the place in an instant.

And it is that impressive close-knit spirit which is evidently one of the main reasons why H Lamb Jeweller is as strong today as it has ever been.