A tank was given to West Hartlepool in recognition of its record fund-raising achievement.  In November 1917 two tanks took part in London’s Lord Mayor’s Show. The recent successful participation of the tank in the Battle of Cambrai had fired the public imagination, their appearance in the show proved very popular with the spectators who were fascinated by this new “wonder weapon”.

The National War Savings Committee decided to capitalize upon this fascination and use the tank to sell War Bonds and War Saving Certificates. On November 26 1917 battle scarred Tank 141 “Egbert” was brought over from France and put on display in Trafalgar Square. The campaign was soon extended to the whole of the country, the touring tanks would spend a week in a town or city with two young ladies selling war bonds from a table set up inside the tank. A competitive spirit was engendered between the visited locations, the town or city that invested the most per capita would win the tank “Egbert”.

During this time Hartlepool asked for a visit of a Tank. On February 4th, 1918. “Nelson” arrived and arrangements for a warm reception had been in progress for some weeks before and the district was throughly roused in anticipation of the visit. Thanks largely to the immense energy and enthusiasm of Mayor Edgar, assisted most loyally by all classes of the community, Nelson carried away £2,367,333, or £37.00 0s 8d per head of the population, and West Hartlepool was thus an easy first in the race. Presentation was by Major- General E. D. Swinton, C.B., D.S.O., in front of the Municipial Buildings.

The tank had been used at Cambrai and carried many scars from this conflict. West Hartlepool Corporation accepted the tank ‘Egbert’ from the National War Savings Committee. The amount raised for Tank Week was £2,367.333, about £37 per head – equivalent to approximately £1300 in today’s money. 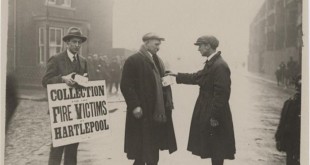